This is what happens when you watch Disney films with one grandchild and then take another one to the swimming pool. You get an earworm, not of a song, but of Ellen De Wotsit going on, and on, and on…

But the film is funny and the swimming was great fun. It seems our four year old has no fear at all, which raises the grandparental blood pressure on occasion, to be sure.

So in order to come down to earth I decided some tangling was in order. I had a little look  through my desk to check if I had any swaps or challenges outstanding and I don’t…Wow! So I wandered around Pinterest for a while, again, then a couple of favourite blogs, Coffee and Creativity being one of them, where Michelle Wynne had mentioned doing the It’s a String Thing challenges. So I thought I’d have a look and maybe go back to the beginning and try them all. Five years of strings, well maybe not.

And then I had an idea, yes, it happens sometimes. Although I have done all my challenges and swaps, I have lots and lots and lots of tiles received from other tanglers all over the world. Some are empty tiles made of unusual or prepared paper/card and some have a start that I will complete. So I’m going to mix the two, where appropriate. In addition, I’ve been preparing pics with Brusho inks,  Promarkers and Sharpies and then tangling over the top.

Down the left hand side  are some of them awaiting further attention. I’ve done the colours much brighter than my usual choices because the black and white patterning, maybe with shading too, will sober them up a bit. I hope!

We’re off to Kos for a holiday soon and, rather than take a full case just for drawing, which puts the luggage allowance for clothes etc at risk,  I’ve done the colouring on some postcard size pieces, ready to do the line work and patterning while we are away.  That way I just take a few pens. (And pencils, and erasers, and tortillons  and so on.) I do get a lot of pleasure sitting on the balcony overlooking the sea and tangling in the sun. Consequently, I’ve prepared for one a day although I don’t for one moment  think I’ll have time to do that much – the sea will beckon seductively and I will give in to its blandishments.

I’ve also done some more toppers for cards and it is my firm intention to actually get on and make the cards when we get back.  In fact, I’m thinking of having a stitch and bitch at my house and get the girls doing a production line, matting and layering them into finished products.

Below is the final set of toppers ready to use. My oh my, I do seem to have been busy!

So that’s all until we get back from frivolling our time away. Until then, world, be good, won’t you? 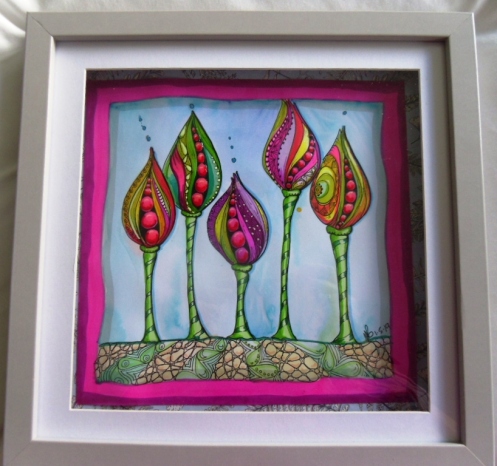 I often think my brain is full, but every time I see something artwise that I haven’t tried, I just have to have a look on Youtube or Ravelry and maybe give it a go. The result is an endless round of unfinished projects and a desk crammed with stuff I may one day need. So tomorrow – you’ll notice I say tomorrow, not today – anyway, so tomorrow, I’m going to finish all my swaps and send them off. I am NOT going to start anything new until that is done.

A friend of mine runs a craft sale to support local charities and I gave her a load of cards I’d made that I knew I wasn’t going to use, plus some crochet bits and pieces. It briefly cleared a space in the craft/computer room. In a rush of enthusiasm – I have a lot of them – I made some more toppers. Toppers, for those of you who don’t make cards, are the focal picture/design/greeting that goes on top of all the fancy layers and embellishments on  cards.

So I went on Pinterest to beg, steal or borrow some ideas. I have a love/hate relationship with Pinterest. I can get lost for hours. And hours. And hours. It’s the same with Youtube. And then, having spent hours looking at other people’s stuff, it goes one of two ways:

Either –  I decide never to draw, paint, create ever again because  everyone else is so much better than me.

Or – I can’t wait to get started. On everything. All at once.

Recently it has been the latter and these are some of the resultant toppers waiting to be made into cards.

And then I got a bit bug infested, if you see what I mean. But then it was flowers, although none of them would be recognised by a botanist, not a sane one anyway! I don’t claim any of these as my original ideas, by the way, just my interpretation of something better. And if you like them, then obviously it was all my own idea and if you don’t, it was someone else and I was just trying it out. 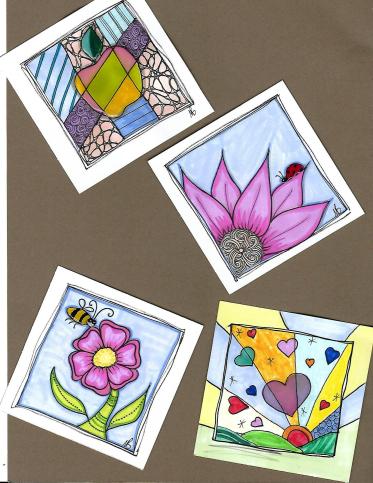 On each one of these there is a glossy accent, on the lady bird, the apple, the heart and the bee, It helps to create a bit of texture.

By the way, isn’t it odd? Some time ago I decided to stop trying to do the Diva Challenge every week and then she went off sick. (Just a coincidence, I think!) And yet I still check her site every time I open the computer, partly to see if she is OK and partly in case there’s a new Challenge that I might like to try after all. Hope she gets back to normal soon.

So here are some more Zentangle ones:-

UPDATE- Tomorrow has come and guess what, I started something new. So much for good intentions.

I’ll leave it here for now and see you again soon. Until then world, be good. ish.