It’s a case of desperately trying to finish things. In terms of the crochet, it’s a shawl, a vest top, a cardigan, a poncho or two, so far. In terms of drawing, it’s Christmas cards. But before I show you what I’ve been working on, I want to acknowledge some lovely swaps I’ve recently received.

And then on to some of mine. I’ve kept them simple but I think they will be OK.

And then a finished card. 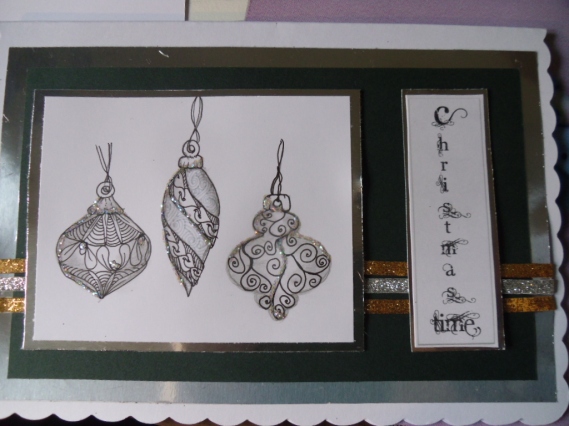 These have been fun because they are fairly quick to draw. I’m thinking of doing a bigger piece, a ZIA, for Christmas this year, mainly in black pen but I haven’t decided what yet. I’ll keep you posted.

And so we come to this week’s Diva Challenge:

Weekly Challenge #373: “Non Dominant Tangling!”
Yes, i know!  I hear you groaning from the back of the room… but hear me out.

So one of the things i did during my workshop was to have the participants tangle with their non-dominant hand.  And because i had them captive in a room, they all did it.

I know that over the almost 8 years that i’ve been blogging, there has been a very strong divide among my readers, those who love this particular challenge, and those who hate it.

No surprises to say that I hate it. I can’t see the point in drawing something that you know from the start will look awful In fact, I nearly didn’t do it. But, you know how it is, you just sneakily give it a try and then you try to make it better and then you give up. For what it’s worth, here it is. But my initial reaction was right…. Waste of time and ink.

And on that happy note I will say farewell and remind you, as always world, be good -ish.

This my new motto, my modus operandi from now on.  It began with drawing and the fact that my hand is not always as steady as I would like it to be, especially when drawing auras. I had an afternoon with a couple of friends where we worked with some basic tangles and one lady, a retired maths teacher, was aching to use a ruler so her lines would be straight. Obviously, I slapped her and made her stand in a corner on one leg for half an hour until she had learned her lesson.

“But my lines wobble!” she wailed.

“Mine too.” I replied “But it doesn’t matter. Learn to live with it. More, love how it wobbles. Embrace your wobble.”

And as we collapsed in waves of laughter, a way of life was born. We agreed that drawing and life would be happier if we just learned to embrace the wobble. So I’m going to begin Inktober again, with a bijou tile for each day and a single pattern on each tile. I’ll show you when I’ve caught up. I will of course do other things too. I’ve received a lot of swaps recently and been extremely remiss in acknowledging them, so I’m going to show them to you here and then put a link from my FB site.

First, two from the Geometric Swap on Zentangle ATC

So that salves my conscience to some extent, although there are more but I’ll put them in my next post.

I’m busy with all sorts of stuff at the moment. This includes more crochet as I prepare for Christmas presents for the family. They may not want them but the poor buggers are going to get them anyway. I’ve done a little hippy jacket/cardigan for the youngest; I’ll do another one for her 10 year old half sister; there will be, hopefully, a pretty vest top for my daughter in law and a poncho/sweater for one of my closest friends. The boys are trickier, as I did them all scarves last year. Possibly beanie hats?  We’ll see. My daughters are tricky too, as one of them crochets and therefore I feel my offerings may be a bit de trop and I don’t think the other one is all that keen.

As for the loved one, well, what do you give the man who says, “Don’t bother love, I’ve got everything I need, don’t waste your money.”  And he means it too! Grrrrr!

However, I have started the next round of Christmas cards, Zentangled baubles on fairly plain mounts. I’ll show you next time.

In the meantime, there is the Diva Challenge. I missed the last one but I happened to be using the tangle she asks for on a gift tag, so I offer it here as my response tot his week’s Challenge.

and that will do for this week. until we meet again, world, be good. ish.

So we had a little trip to the sunshine island of Tenerife. (Again, I know but we like it.) We stayed in an hotel we’ve visited before; did the seafront walks we’ve done before; visited some of the bars we’ve visited before and over ate the food as we have over eaten before. We weren’t there for new and exciting, we were there for familiar and relaxing. Now the hotel is very nice, not glam, not too stylish but spacious, comfortable and nicely placed for the

However, the entertainment on our past visits has varied from dire to excruciating, to the point where it was so bad it was good, if you know what I mean. Although there is something slightly charming about a Spanish singer with a reasonable voice who doesn’t know the words to familiar songs but makes noises that approximate the real thing, it gets a bit wearing and I can’t help feeling that a professional singer should know the words of the songs he  sings or sing songs he knows.  And then there is the marshmallow singer, who blurs the words, has used rather too much Grecian 2000 and relies on a sideways look, a wink and a grin showing rows of teeth you could project films onto to compensate for musical shortcomings. Or the woman who thinks she is a cross between Adele and Celine Dion but resembles either Hilda Baker in sequins or Margarita Pracatan. (https://www.youtube.com/watch?v=VMOWwg_IoAw )

We tend to retreat to our balcony overlooking the pool and have a glass of wine (or two) and a friendly (usually) game of cards.

So we were a bit surprised and definitely pleased on our first night, to be entertained by a guy who really could play the saxophone and, to our uneducated ear, played the right notes in the right order.  On the second night it was a guitarist who gave Carlos Santana a good run for his money, much to our delight, and on the third night it was a Beatles tribute act, which we also enjoyed very much. On day 4 it was the in house entertainment team doing songs from the movies, which made up in enthusiasm what it occasionally lacked in musicality and it really was fun.

But it was downhill from there on in. The Queen tribute act was embarrassing, well, they weren’t embarrassed but we were. (He knew the words but failed to find a fair few of the notes.) The Mama Mia show made Pierce Brosnan’s vocal efforts look like Pavarotti and the last night was karaoke. Why do people do this? If you can’t sing, fine, but why get up on stage in front of strangers to prove it and then expect applause? What are we applauding, sheer barefaced audacity? Or gratitude when it stops? So this chap gets up and the music begins for “Delilah”. It was quite a while before it occurred to me that he was actually singing that very song, and when he bawled the words “Why, why, why?” I

I suggested I might go up and sing “I Will Survive” and the loved one offered “My Way” but we realised that, although neither of us can sing, to meet the standard we had seen, we would have to sing the two songs simultaneously, with the backing tracking playing “Phantom of the Opera”.

We had an early night instead.

The weather was much hotter than we had expected (29-31 rather than 21-24) , so we curtailed our usually longish walks and returned to spend our time wallowing in the pool in the afternoons. We then retreated to our room, where the loved one lay down pretending he wasn’t having a nap and I did either crochet or some tangling. My crochet was using oddments of wool leftover from other projects and making little hats, mitts and bootees for local hospital neo-natal units for premature babies. This was fun, although getting any two bootees to be the same size was something of a challenge. I also spent quite a bit of time playing what the American crocheters call “yarn Chicken”, where you crochet as fast as you can to get finished before the wool runs out!

I started Inktober with enthusiasm, using Stephanie Jenner’s prompts. My first attempt used three or four tangles but was more a case of getting some practice than achieving an attractive finished product, which is fine, it is what it is. I liked the second one better. And I have a swap using pairs of Bijou tiles and a geometric theme, which was quite a challenge because I only do grid patterns under protest and I couldn’t think what else to do. I’ve done quite a few (as you can see above) because they are in pairs, but I haven’t decided which ones to send yet.

And then there is the Diva Challenge. I think I’ve missed one but this week’s is as follows:-

Weekly Challenge #370: “UMT – Mezzanine by HeidiSue
This month’s Use My Tangle challenge features the tangle Mezzanine by Heidi Sue.  It’s so cute, and it makes a great “statement” tangle!  You can find the step outs HERE

So I tried it and I think it’s one that will grow on me.
And finally, one of those proud parental moments. When on holiday with us a couple of years ago, my younger daughter saw some novelty bottle openers, took a couple home as souvenirs and asked me to get her some more this time. The thing is, they are bottle openers shaped like a penis, albeit a strangely decorated one. Now I am not by any means a prude, but can you imagine this little chunky old lady toddling into a shop and asking for four penises por favor? The joys of being a mum. 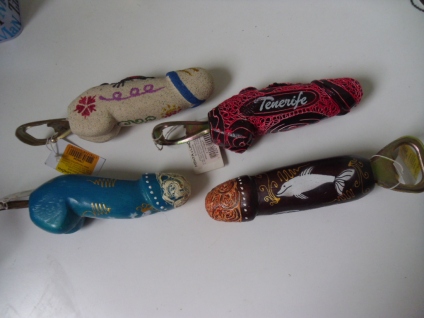 And on that happy note I will say farewell for now. When my embarrassment has faded and the blushes have died down, I will, like the Terminator, be back. Until then, world, be good-ish.