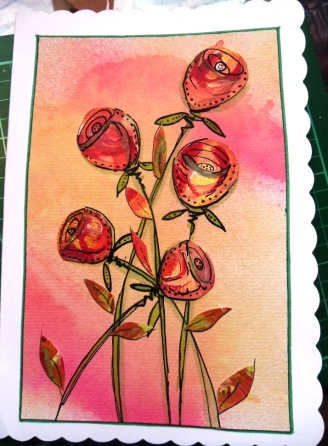 Still focused on Porgy and Bess because  it is, for the time being, Summertime. And we’re having a real Summer too. Sunshine, blue skies, gentle breezes, the smell of lighter fuel drifting across the garden as various neighbours desperately try to light barbecues and cremate some sausages. It doesn’t seem to come naturally to us Brits, this barbecue stuff. To start with, there’s a tendency to make a pyre the size of a small block of flats; then it won’t light properly so everything is dowsed in kerosene or the like; cooking either takes place in a miasma of petroleum vapour, making the addition of smoky chippings totally pointless, since all that can be tasted is refined fossil fuels, OR, we go and have something to eat while we wait for the coals to achieve an appropriate temperature (Generally, people test the temperature of the coals by sticking a metal skewer in. If it melts, it’s ready to cook.) and have no appetite by the time the food is  ready.

AND THAT’S NOT ALL…

There is a naive assumption that barbecue is an easy way to cook. And another is that everything has to be barbecued – veg, fish, fruit, neighbours, you name it, we can burn it to a crisp in no time. Conveniently forgotten are the hours of preparation making the burgers from scratch, marinading the belly pork or steak, building the kebabs, creating at least three types of salads (with dips or dressings, of course) and generally making a meal for a family of four from enough food to feed the village.

We don’t do barbecues at our house. I’m quite good at pies, pastries and cakes, casseroles, stews and gentle curries but barbecues R not us.

Anyway, when we go to Spain and/or Greece, we eat out a lot and that’s the time for lamb cooked on a spit over their version of Towering Inferno, souvlaki with Greek salad, and proper rare steak, singed on the outside and red in the middle. You should try the paella cooked over a firepit,   on the beach in Nerja or the sardinas on a skewer on the seafront at Torre del Mar or the kleftiko at Valantina’s in Lardos  ….  Dammit, I’m faint with hunger now. 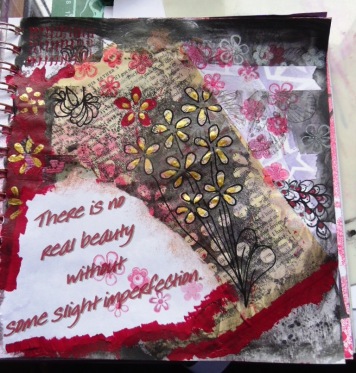 It’s been so consistently hot and clammy and old fashioned English Summery recently that I’ve retreated indoors and done a fair bit of art work. I’ve done some more journal pages, some finished and some still incomplete. I had another go at this one, which I just hated  and it now looks like this… (I’m sorry Michele, your page disappeared entirely under the gesso.) 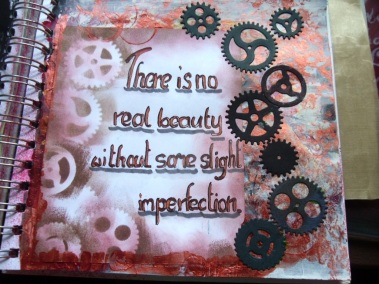 Still not confident I think, but I’m getting the idea. And the idea that I’m getting is that the extreme mixed media stuff, with collage and gesso and texture and old bus tickets and who knows what else,  is not for me,  but the many layered drawing/inking/stencilling probably is more my style. I have  “discovered ” a video channel on Youtube recently and am now an addict  – the site/page/ channel is called Creationsceecee and I would heartily recommend it. (https://www.youtube.com/watch?v=JYqZWhdaGh8 )

These are a couple of completed journal pages which are better but still… However, I did have fun doing these and I realise it is very like Zentangle in that the process is more important than the product a lot of the time. You may not be able to see them but there is some tangling on these. 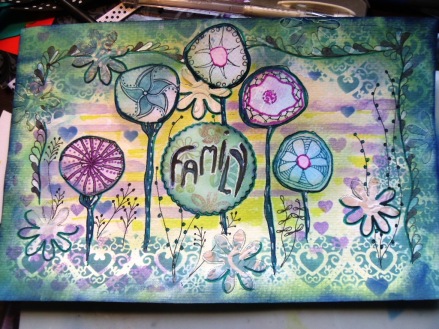 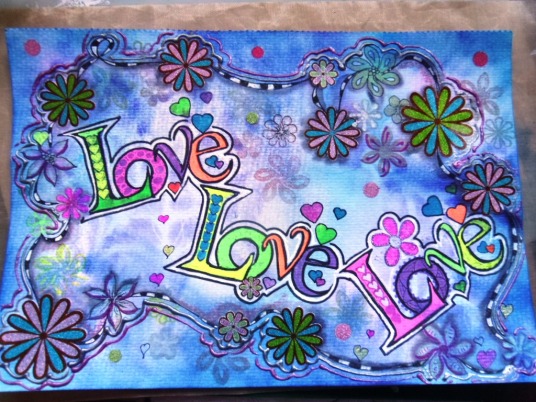 As a result, I’ve been trying water colours and inks again and getting better results than before. At the top of the page, you can see one of the cards I made following the videos and I’m mildly addicted to this particular method. Here are some more: 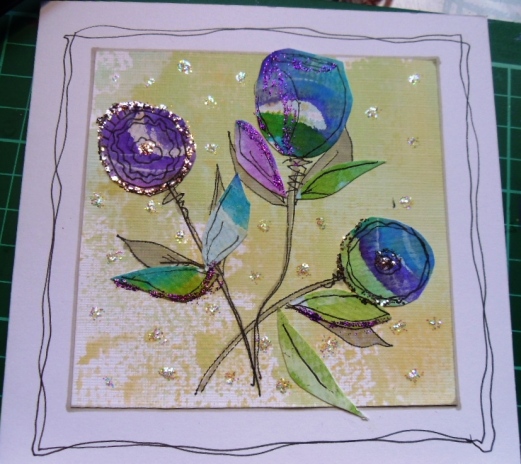 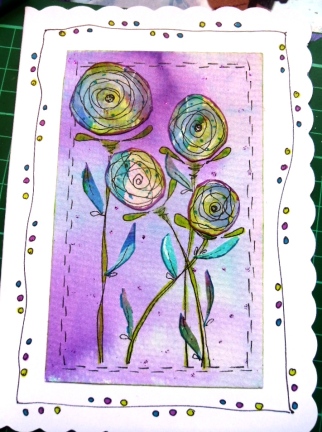 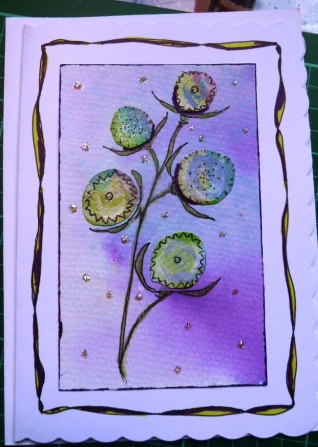 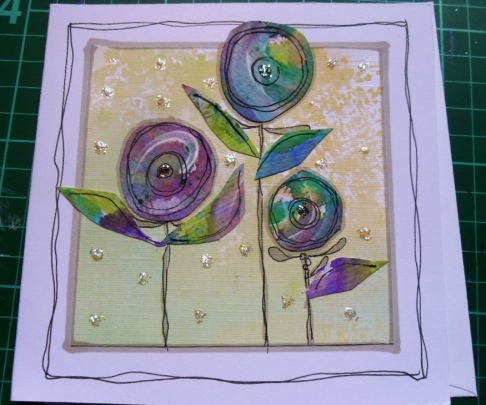 All variations on the same theme but I really did have fun with them. There’s a bit, but not a lot of Zentangle involved but that doesn’t mean I have given up, oh dearie me, no.

However, I think that is for another day. I’m getting back into blogging too, although a little erratic. i hope you’ll check back every now and then.

When I was a child I liked music – still do – so my Mum and Dad joined a music club to buy me classical records to play on my Dansette Major record player. It was my pride and joy. I can remember standing  in the front room (Sitting room/parlour, depending where you come from. The room that was only otherwise used if we had visitors.) conducting the Halle Orchestra and singing along to the Messiah at the top of my voice. I bet our neighbours loved that! One of the early records that I got was Porgy and Bess, which I fell for hook line and sinker. It led me to love blues and soul from a comparatively early age and I’ve never stopped. And one of the songs in Porgy and Bess (“I Ain’t got no Shame”? possibly) has the line “Ain’t no use complainin'” and sometimes it is so right. However badly done to we may feel, there just ain’t no use complainin’.

This comes home to me at present because we’ve just come back from a trip that was less than perfect. All sorts of things were wrong – they wanted us to share rooms when we had booked (and paid for!) separate ones.  We were travelling as a couple and a single lady, so sharing a room really wasn’t on. We’re good friends, but not THAT sort of good friends.) The compensation offered didn’t materialise. The supposedly five star hotel just wasn’t. (It was mainly very nice but it wasn’t five star.)  The Dining Room staff had arguments over our heads as they cleared the tables.  The airport on the way home was a shambles, badly dealt with by the tour reps. The goods we’d ordered on the outward flight were not there for us on our return.  It just went on. It was especially galling because for the  friend we had with us,  this was her main holiday of the year and it should have been just so. So the day after we got home I got a customer satisfaction survey.

You may imagine how long it took to complete it. And my language when the site timed out and I had to do it all again.

But thing is, as my grandson Ben would say, the thing is, my carefully worded and desperately fair critique of the poor service we experienced will have no effect whatsoever. I won’t be compensated but even if it was offered, what compensates for a series of comparatively small, badly dealt with problems? And the smooth apology, if is is forthcoming, will be worded in such a way as to be no apology at all. “I’m sorry that you feel that way, madam…” I mean, they’re not sorry and it’s not how I feel that they should deal with, it’s their poor standards of service. It’s annoying to be ignored but but it’s almost preferable to being insincerely schmoozed.

So let’s do some tangling and get some focus and relaxation. I did too. I’m doing a set of postcards for the latest swap and using them as 100 Days too. (I’d be drawing 18 hours a day if I tried to cover everything separately!) The first one just fell out of my pen. No thought, no plan except to have a border and be vaguely floral. (The brief is to do a bordered card with either a floral theme or a Summer landscape.) You can see it at the top of the page.

And then, as I was part way through drawing out another one, a thought came to me out of the blue. (It doesn’t happen often so I treasure these moments.) ” Clarice Cliff,” a little voice said to me, “try to do a bit of Clarice Cliff.”

This is not my usual colour palette but I got out the Sharpies and gave it a go. Now poor old Clarice will be spinning like a top at this travesty, but I got an awful lot of pleasure out of doing this one.

And when we got back from our trip, the floor was covered with post, much of it was what the loved one  calls “hate mail” but is really happy mail from various swaps. So I’m showing you them here because you will understand what a thrill it is to get tiles and zenbuttons and bookmarks and who knows what else from friends across the world.

So much lovely work.

So I’m going to leave it there and wait for the next Diva Challenge.  We’re off down to Wales to see my wonderful Ben soon, so there may be a pause in the drawing for a week or so.  Well, ain’t no use complainin.

Until next time, world, be good-ish.