Depends on the weather in my case, I do so hate leaving the sunshine behind.

But this week we have been travelling in the UK and next month we intend to do some more, in Scotland this time. My cousin who we used to visit when he and his wife lived in France, now lives in Hampshire, back in England, and it’s a part of the country we don’t know too well, so off we went last week to see them.

It was a fairly uneventful drive down there. We missed our way once or twice but this is de rigeur when I’m map reading and we always get there in the end. We arrived to rapturous welcomes and chicken curry and an evening yattering away like nobody’s business. When we get together, oh how we do go on. And on. And on…

On Saturday, we drove down to Arundel Castle, which was new to us and turned out to be a great delight. To start with, we found it easily, which is not always the case. And we found a convenient car park. AND it didn’t cost the proverbial arm and leg just to park.

It couldn’t last, could it? We are people of a certain age and the placement of public lavatories is a matter of some importance to us. There, at the edge of the car park, were public loos, excellent news, you may think. But no. Why? Because they were not gender specific. Now we Brits like to know where we stand/sit. We like Ladies public conveniences and Gentlemen’s public conveniences, not a loo door with a picture of a man AND a woman on it. There was confusion. Were we meant to go in together? Would it only accept heterosexual pairs? What would happen if a person went in alone? Would the door fly open half way through the event and an armed Convenience Supervisor leap in, dragging behind him/her a complete stranger and insisting that we share? (Or two complete strangers, one of each gender, to ensure the right mix, so to speak?) The discussion was heated but we eventually did what a man has to do and then went into the castle.

The castle is lovely and full of interesting rooms, the first of which was, no, not the lavatories, we’d solved that one, the cafeteria. And very nice it was too, if a little over priced. The staff, however, were efficient and friendly, the tea was hot enough, strong enough and came with an extra pot of hot water – very civilised – and the scones with jam and clotted cream were delish. It’s a fascinating place. I won’t bore you with the history, you can read all about it here… http://www.arundelcastle.org/the-castle/history.html … but it is stuffed with fascinating bits and pieces. There are lots of family portraits and religious artefacts, coats of arms and pieces of armour, and armaments, and a private chapel bigger than many a parish church. We were impressed with all of it but when we came to the library it just took our breath away.

It’s not the number of books, any library would have them; it was the room itself, filled, from floor to ceiling, including the ceiling, in fact,  with the loveliest carved wood panelling  I have ever seen and, in spite of its undoubted magnificence, a room you could sit comfortably in and read. I’ve never envied the aristocracy before but I really wanted that room. Even the loved one, whose strongest term of approval is “Aye, it’s alright…” actually said…

And then,and if this doesn’t impress the Hell out of you, I don’t know what will, the lady who was supervising the room noticed that my cousin’s wife, who has had a hip replacement and now has a bad knee instead, was walking a little uncomfortably, asked if we had seen the gardens yet, which we hadn’t.

“Well,” she said, “When you go outside, there will be  a member of staff, who will call a buggy to take you down to the garden entrance…”

So we did and there was and he did and we did. Fabulous. Felt a bit cheeky but it was obviously all part of the service. Excellent. And the gardens were spectacular. Not in a huge and dramatic way, but just lovely. As you can see from the pictures I took, dozens of them. 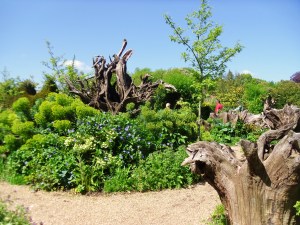 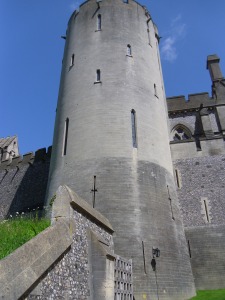 What an ace day out. And that was just the first day of our stay. Can’t wait to tell you about the rest of it!

While we were away, because we spent little time lounging and lots of it out and about, I have done very little drawing, apart from the flower ring you see at the top of the page, which has been both a blessing and a curse. I’m not too unhappy with the drawing itself but the colouring went all wrong. Well, not all, but you know what I mean. I was using my new Koi water colour pens, which I love, but am still learning. I wanted pale and subtle but what I got was loud and glaring because I used paper that didn’t encourage blending or fading the colours with water. Dammit. Oh well, lesson learned.

But for now, it’s the Diva Challenge and…

And she wants us to use patterns that are all straight lines. This is good for me, as it makes me concentrate, so I’ve chosen just three patterns: Zin, Rain and a version of Farling. I’ve used Rain before but not the other two, so it’s been a genuine challenge and good fun.  I couldn’t make up my mind whether or not to use colour, so I scanned it both ways – so which do YOU prefer?

I did a birthday card for my son in law. I had all sorts of ideas to include his hobbies and interests and then I thought, nope, he can have some Zentangle, why not? He’s tried it himself in the past and I’m hoping to recruit him to the cause sooner or later. Maybe this will set him going again – or put him off for life!

That’s Crete, of course, and one of my favourite ever places. (Alright, yes, there’s Rhodes and Skiathos and various areas in France and the Peak District in the UK and…..) Anyway, one of my favourites, as I said. Although, coming from the murk of the north of England, it’s the sunshine that attracts in the first place, the island itself has a real magic. It’s quite big, in comparison to the other Greek islands and there’s a wide range of scenery, from cliffs and mountains to beaches and bays; from vineyards and farms to night clubs and busy modern cities.

We were there from May 2nd with my cousin and her husband plus a couple of friends we met there two years ago. It’s one of those things, when you recommend a place, you hope and pray that it’s as good as you remembered and that the others will like it too. And it’s the same way with friends – we knew WE would get on fine with Ann and Kev (Cousin and hubby) and ditto Gareth and Sonia (Friends from previous holiday) but would they get on with each other?  Well, we needn’t have worried. We spent the whole week laughing, teasing and generally enjoying each others’ company. END_OF_DOCUMENT_TOKEN_TO_BE_REPLACED

The thing is, when it works, it’s great. And in comparison to what was available when I was a kid, it’s hard to believe things have changed so much. We got TV when I was about a year old, so my mum told me. We got a car when I was about seven. We didn’t have a home phone until I was about 21.  They had central heating installed after I got married, I seem to think, although the house the loved one and I moved into when we married had it already.

How did we ever survive, back in the Dark Ages? END_OF_DOCUMENT_TOKEN_TO_BE_REPLACED

And, finally, the reveal.

I mentioned  in my last two posts that i had a secret and today I’m telling all. So, ta dah!

When I met up with Lynnel Harlow some weeks ago, she gave me contact details for Woodware and Stampendous , craft suppliers based about 50 miles from where I live, and they offered me the opportunity to go with them to a craft show to demo some of their products. Me. Yup, you heard, Maggibee, the dumpy middle aged retired teacher is going to be demo-ing using the Dreamweaver stencils, Sakura pens, paints and pencils.