At the end of my last post I mentioned that my son had a new job, although he hasn’t started yet but it was, nevertheless, good news. A while ago, at the time he was just starting  the previous one, we had offered to decorate the sitting room for them but nothing had been said further. We let things lie until last week, when he got in touch to ask if the offer was still open. The loved one said yes. Dammit. They bought the paint and wallpaper and I ran out of excuses, so today we drove down to their house with old sheets and table cloths as dust covers, an assortment of brushes and rollers and some old clothes to wear during the process. I was really looking forward to it. (Not)

It was every bit as exciting and rewarding as I had anticipated.  We had created chaos, pulling and dragging furniture hither and yon,  in order to make space to work, and then we had to tidy it up again, knowing it would all have to be dragged about again tomorrow. I ached, only a bit, but it was there. This is no way to spend your retirement.

And then there was the cat. Just as we had blocked the door with a bookshelf, the cat decided he wanted to go out, so our son, who presumably loves this cat, had us moving the bookshelf to let him, the cat, out, which we did. Having been outside for upwards of three minutes, the cat, having discovered for himself what we had gathered merely by looking out of the window, i.e. that it was a lousy day, indicated that he was now prepared to come back in. Through the door that we had just blocked with bookshelves. Again. So we stopped what we were doing and moved the bookshelves to let him, the cat, back in. Now the thing is, and correct me if I am wrong, but I thought cats were classed as animals and, therefore, that outside is the right place for them. I also thought, clearly erroneously, that the owner made the decisions… A gentle reminder for me not to be tempted into getting a pet. Ever.

Anyway, today the loved one went to finish the job without me because I can only tolerate so much and I feared for the cat’s life. So I stayed at home to make Chicken Piri-Piri and a Chicken and Vegetable Casserole; one to eat and one to freeze. (And do some drawing – shhhhh.)

So when my daughter phoned and casually asked me to “pop down” to her house to “check on the dog”, I really should have known better. Why did the dog need to be checked? Because she had been sick. All over the carpet, apparently. However, all was now clean and it was just a routine matter to give her the once over. So I agreed. I know, I know,  shallowest learning curve on the bloody planet.

Now as I didn’t intend to go down and make sure she was OK, , sorry, “pop down” and “check the dog” until mid to late afternoon, I spent about four and a half hours anticipating what I was going to find.

3. A healthy but stir crazy beast who would leap upon me and exfoliate my entire face in a frenzy of affectionate licks.

I was almost grateful when the latter proved to be the case. To such an extent that, when she, Kitty, the dog, don’t ask, brought me her collar and lead, I agreed to take her for a short walk. Walk? No. Drag? More like it. She is not a small dog. Frankly, I’m not a small woman either but we still looked as if I was water ski-ing behind her. I now have one arm significantly longer than the other and ache just as much as if I had been doing the bloody decorating. Oh, yes, and we stopped and sniffed at every lamp post, every gate post and every third blade of grass. Well, I didn’t, obviously, but I could have if I’d wanted to.  A gentle reminder for me not to be tempted into getting a pet. Ever.(Did I already say that?)

The day before yesterday, the phone rang and when I answered it:

“If I’m reeeeelly good when mummy takes me to Cardiff tomorrow, gooder than usual, will you knit me a teddy please? Well, the thing is, well,  it’s got to be a rainbow teddy, If you can’t do a rainbow, I’ll have green or even yellow but not pink. Got that?”

“Oh Grandma, you are the bestest knitter ever.”

So off we go to Doncaster, the loved one and I. Our priorities have changed for this outing now. Vegetables? Meat for tea?   New boots? No. We are on a mission. Rainbow wool. And, believe it or not, we got some, not entirely rainbow but random blue, white, red and turquoise to make stripes. That evening I phoned back and got the seal of approval , so off I went with the knitting.  You might ask if I used a pattern but I bet you can guess the answer, so it wasn’t until I started to put the stuffing in that I noticed that he, the bear, was a bit tall and thin. Well it’s too late now, I’ll just have to finish sewing him up and hope for the best. (Every time the loved one sees it, the bear, he grins and looks away quickly. This is not good.)

The thing is, well,  as Ben would say, we’re going down to see them this weekend and I’m imagining what he will say when he sees BB. (Ben’s Bear – it was going to be BRB {Ben’s Rainbow Bear}but that’s a bit close to Barbie and he really doesn’t want pink.)  I’m anticipating what he will say. I mean, he will be ruthlessly honest, I know he will. And I’m not sure I’m up to it; we Grandma’s are sensitive souls. I even looked at the Build a Bear website. They do a rainbow bear for £16.50; it’s not expensive, when your grandson’s happiness is at stake. But it wouldn’t be knitted by Grandma, would it? Oh dearie, dearie me.

To take my mind off the worry, I have done some drawing. First, I decided it was time I finished a piece I’ve been working on for ages.

And then I just sat one evening, half watching t.v. and this is what happened. It just fell out of my pens without any help from me whatsoever. And then, , trawling through “Zentangle trees” on Pinterest, and I really can lose hours that way,  I found one I liked.

I have to own up to this being a direct steal from the one I saw there. It’s signed by Evelyn, 27th April 2013 but I’ve lost the original web address. Thank you, Evelyn, whoever you are.

And then, I suddenly realise, there’s

Diva Day!!! Can’t wait to see what she comes up with this week. Is this an addiction?

My word, it’s a goat. Apparently it’s almost Chinese New Year and it will be the year of the goat/sheep, so our challenge is to do something goat related. The mind boggles. 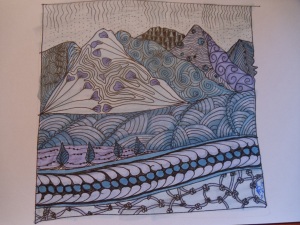 to the other side of the mountain?

I’d better see what I can do then…

Well this is it. Off to the airport in ten minutes so this is a real rush job but it had to be done,,,

An American  lady I have met via this very blog is here in the UK this week and we are going to meet up tomorrow and no doubt giggle about our experiences with Zentangle, card making and crafts in general. This is sooooo exciting, probably won’t sleep tonight!

We did meet up and I’ll tell you all about it next time.

Surprises first, I think. I did it! Yup, cleared out the unfinished/unlikely to be finished stuff, completed some and there’s space, oh yes indeed, there’s space between the boxes, tubs and folders in my craft room. (Not for long but…) Anyway, huzzah for me!

And resolutions? Well the first is obviously to avoid it getting into that state again. I’m not confident but you never know. And second, to go back to some basic Zentangle. When I started, I kept finding patterns, trying them out and, when I had a satisfactory version, storing them in a pretty box. More recently, I’ve been going off in all directions, trying to do everything instead of really working to improve my technique. So… some time to be spent on random “stuff” and a little time – each day if I can manage it- to completing my little (big) box of tangles.

I did another couple for my friend to choose from for her birthday. END_OF_DOCUMENT_TOKEN_TO_BE_REPLACED

Mathom was the hobbit term for anything which they had no use for but was too good to throw away… Museums in the Shire were called Mathom-Houses.

I sometimes feel I have a house full of them. I planned, today, to clear a few mathoms from my crafting area, once the spare bedroom but God forbid anyone would ever need to sleep there. I have a box, in fact, two boxes, of unfinished projects and I’m going to go through them, ruthlessly, assess whether or not I will ever complete them and either

(There is, of course, a C option, which is to put them back in the box for another time. Trying to avoid that one.)