“Tonight I poured a bucket of freezing water over my daughter’s head. I did it at her request and I did it under protest.

I have been nominated to take the same challenge myself. I will not be doing it.
When I do something stupid, I do it because I choose to.
When I give to charity, I do so privately, by direct debit, every month, not when it’s fashionable.
I should not feel that I have to justify my refusal but I do feel that way.

I do not accept the challenge.”

END_OF_DOCUMENT_TOKEN_TO_BE_REPLACED

Wednesday lunchtime and all our guests have gone. The beds are changed. The washing machine is chugging away, disgruntled by yet another flurry of activity. We had leftover pizza for lunch, without catering for a house full of people. Quiet, innit?

END_OF_DOCUMENT_TOKEN_TO_BE_REPLACED

Hello world, hope your weather is cheerier than ours. Rain, clouds, winds, more rain. It’s August; doesn’t that mean it should still be Summer?

So we have family staying with us at present. My cousin, his wife, their grown up daughter and 3 year old granddaughter, to be exact. We always get on really well so it’s fun and we spend a lot of time laughing. However, we don’t live in a particularly touristy area so the list of fun places to go is limited.  And it’s raining, so we want inside places to go. In a brief afternoon of sunshine, we took the little one to play in the park and they all spent a day visiting other family on Saturday. On Sunday, another cousin and his wife came for Sunday dinner and the eight of us spent the time between family stories and scrambling in the play tent with the little one.  What my dad used to call “good, clean fun”.  END_OF_DOCUMENT_TOKEN_TO_BE_REPLACED

Huzzah! It’s Monday, that’s a new Diva Challenge.  Unfortunately, my morning starts several hours before it does in Saskathingy, which is where she lives, so I wait with bated breath for the sun to come up over the Rockies or whatever minor outcrops they have over there on the other side of the pond. I mean, why can’t they all be on Greenwich Meantime like we are in the civilised world?

Anyway, on it goes and I like it – water is the theme and I can think of all sorts of possibilities already. AND, no-one else has posted one yet so I could even be the first to post. Oh wow, does life get any better?  You can see me heading for a fall already, can’t you?

END_OF_DOCUMENT_TOKEN_TO_BE_REPLACED

For those of you out there who don’t get the reference to the Forth Bridge, it’s a hundred or so year old railway bridge over the Firth of Forth just north of Edinburgh in Scotland. It’s a magnificent structure but was famous throughout my childhood for the fact that it was constantly being painted in order to preserve its integrity.

According to urban myth, no sooner had the poor painters finished at one end than they toddled back across and started again at the other.   http://en.wikipedia.org/wiki/Forth_Bridge And so it is with tidying my craftroom. (Also known as the computer room and ex spare bedroom, though Heaven help us if anyone had to sleep in there now!)

END_OF_DOCUMENT_TOKEN_TO_BE_REPLACED

Well they’ve gone home. The house, which I expected to be silent, is full of their echoes. We’ve tidied up the toys- didn’t want to, then we could pretend they’ll be back in just a few minutes. We’ve emptied the inflatable paddling pool and the garage is now stacked with all the outdoor toys. The beds are stripped and remade and the bedding washed. The carpets have been vacuumed to within an inch of their lives. And now I’ve retreated to my craft room to cheer myself up with some patterns.

Actually, I think I ought to tidy it up a little first, there’s hardly room to put paper down and, although I think the desk once had a wooden surface, there’s no evidence to support that theory, since all I can see are partially completed projects, unfiled Zentangle tiles and miscellaneous “stuff”.

END_OF_DOCUMENT_TOKEN_TO_BE_REPLACED

The day has started well. My daughter, son in law and grandson, who are staying with us at present, have gone out for the day to a friend’s wedding. I thought at first I’d gone deaf but no, it’s just the absence of small voice saying the immortal word:

“Grandma…” in  an interrogative tone, usually the precursor of a stream of consciousness monologue worthy of James Joyce.

Oh but how I will miss them when they go home. I’ll be praying for that little voice then. It’s like sensory deprivation. No toys to tread on; no wet wipes required; no nose prints on the windows; sounds of buzzing, zizzing, whooshing or flashing lights. Not sure whether it’ll be Heaven or Hell but it will certainly be different from the last couple of weeks.

END_OF_DOCUMENT_TOKEN_TO_BE_REPLACED

While my daughter is staying with us, I’ve been teaching her the joys of Zentangle. I’ve recently bought the Tangle Patterns book from Tanglepatterns.com and then today I bought another one from Perfectly4med.co.uk. This gives me a really good library to work from and I’m trying out patterns that are not my favourites. I don’t know why it is, but I feel mildly virtuous to be stepping outside my comfort zone. No, I know it doesn’t make sense, since only I know or care but there you are, that’s how it feels.

END_OF_DOCUMENT_TOKEN_TO_BE_REPLACED

Well, as if being “helped” by my grandson isn’t enough, we get the new Diva Challenge and I don’t like it. We are asked to do tangles on tiles measuring 2″ by 2″ and it’s not big enough. I can’t do it. For one thing, you need to be precise and I’m not. You have to pick the right tangles and it seems I can’t.  And, worst of all, I’m finding it impossible to strike up a meaningful relationship with Bijou.

Bijou is a snail – look at either the Diva blog or the Zentangle site for more info, I haven’t the patience for it – and to me snails are slimy, creepy things that eat my plants. They are not cute little symbols of a joyful symbiosis between pen, paper and a reluctant creative muse. So I did it under protest and you can tell.

At first, I tried for a good humoured approach, so I did a Christmas Bijou on a card, using Half Moon to draw the card and the Tangles together. Hmmm.

So I had a look at some of the stuff other people had been doing and some of it is great. And they are all fulsomely delighted with the fictionalised snail. For crying out loud, the Diva even “interviews” him on her blog. Yeuch. There’ll be a bloody Disney movie any time now.

So I had another go and copied what others had done by making a set of  four tiles, two with Bijou as the centre and two using some old favourite tangles. Nah, not keen.

So, sorry, Bijou, but I think we will remain star crossed and should go our separate ways. It’s just not meant to be.  Next time we meet. I hope to find you sizzling in garlic butter with a nice chunk of French bread on the side.

We don’t see our four year old grandson too often, so when he comes to stay with us, we are more than happy to see him.  We picked him and his mum up yesterday and I don’t think he’s stopped talking for more then seconds at a time. That’s good, isn’t it? I mean, he’s very fluent and imaginative – and loud. AND CONSTANT.

I retreated to my craft room, switched on the computer and visited a few of my favourite sites, saw something someone had drawn and it set me off on a creative moment. And a little voice said, “Grandma, can I come and draw too?”

Well, of course he can. So I find him some paper and a set of pencil crayons and some pens and a pencil sharpener and off he goes. Within minutes, the pencils are all a good inch shorter than they were and the bin is full of shavings but, hey, he hasn’t sharpened his fingers and there’s no blood as yet, so we’re on a winner, aren’t we?

Back to my drawing, with Ben’s voice burbling away in the background.

“I think I’m going to do one like yours.”

Lengthy discussion followed by ten minutes fairly fevered drawing by Ben and, I have to say, a pretty good drawing of a rainbow with flowers.

“Why don’t you take it and show mummy?”

Off he goes. Peace reigns for seconds.

“Mum says it’s beeeutiful and almost certainly better than yours.”

Nods, “Yes, she userally is. Can I draw something else?”

Further lengthy discussion and a couple of print offs of Curious George pictures to colour in.

“I’m going to do the banana one first.”

“You see this banana? Well, it’s not as yellow as I wanted, it’s a bit green so it’ll be a bit slimy so he mustn’t eat it so I’ve done the skin red and put a cross on it and it says NO with a slamation mark. And he’s dropped skins on the floor and he might slip on them too so I’ve done them red if they’re slimy and then after it sucks the slime up into a vaporous sky and then it goes into a cloud where it descends to the slime centre and that’s it really.” 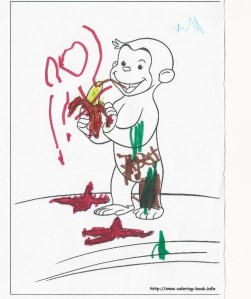 “Please go and show mummy. And Ben, ask her when it’s bedtime won’t you?!